The Skies Are Back!

After a solid 8 months of horrible skies (and an occasional decent sky of which I was working or some such thing) I finally got out to test my gear changes and I'm happy to say that I'm very pleased with the results.

The Atlas w/Vixen ED03s and ZenithStar 66 Guider
The Atlas was trouble from the beginning. I didn't expect that. I had (and still have to a degree) issues with the altitude adjustment. It's tight, it slips, the tongue inside is mangled and the bolt was bent. Improvements to the mount have minimized or eliminated the problems. My friend Richard and I took the mount base apart to get to the altitude stuff.

Problem: The altitude adjustment was far too stiff requiring too much torque to make an adjustment.
Solution: We removed the Atlas emblems by gently tapping and praying with a sharp instrument while softening the glue that holds it on with a heat gun, then loosening the altitude tension bolt (which was severely stripped from the factory and needed replaced).

Problem: The altitude bolt would dig into the cast aluminum causing it to get galled up.
Solution: We took the base of the mount head apart and used JB Weld to weld a 1" x 1" x 1/16" piece of stainless steel to the tongue where the bolt made contact. This improved the smoothness of the altitude adjustment and eliminated the galling problem.

Problem: The rear altitude bolt was bent and slipping on the tongue.
Solution: We removed the bolt altogether, bore out larger threads and replaced it with a 12mm hex bolt. We had to round the end of the hexbolt on a lathe to smooth it's outer edge where it makes contact with the tongue. While we were at it, we did the same thing to the front bolt, but left it at 10mm (the size of the stock L bolts).

After performing these tweaks, polar aligning the mount is much easier. The mount moves when the bolts turn (what a novel concept!) and I use a small palm sized ratcheted socket wrench to make altitude adjustments and it's so much nicer to work with then those lousy L bolts.

I added the D sized ADM saddle and mounted up the side-by-side Vixen ED103s and ZenithStar 66 and was getting an RMS of 0.22 for a couple of hours of tracking a target (M3 in this case). 0.22 RMS is great for this system. I'd like to see it improve even more, but I think the gears are going to need stripped out to get that. But, as it stands, It's under a pixel of error and the stars were looking great, so I'm very satisfied with the results.

No images were kept during this test. Just some screenshots for documenting what was going on.

The Sirius w/AstroTech AT65EDQ and a ATM 60mm Guider
Next up for testing was the new AT65EDQ. This was only the second time out with this scope which was a Christmas present from my wife. The first time was a disaster. The stars were very strange looking and I contacted OPT and AstroTech about a replacement, but Mike Bieler from Astronomy Technologies was convinced it was a pinched corrector and gave me instructions for how to loosen the collar holding it. I was pretty nervous about taking apart my brand new scope which hasn't even officially had a proper first light, but he assured me it was simple - which it was. Removing the focuser, I very slightly loosened the collar holding the nearly spherical corrector (it was like half of a thick, clear glass christmas tree ball). I make-shifted a spanning wrench out of my calipers being extremely careful not to slip and scratch the glass, and voil'a... the stars were round again.

I was checking for the flatness of the field which definitely could be better, but on my APS-C chip, it's *much* flatter then the ZenithStar 66 ever was - even with the WO flattener for it. So, the change in scope was well worth it. I can use 100% of the field (minus a little cropping for stacking lines on the edges) where I never could in the ZS66.

I wanted to check for flex in long H-alpha exposures, so I put in the Ha filter and shot 20 minute subs of IC1318. I was thrilled to see the first sub come out with nice, tight, round, sharp stars.

Again, I'm very pleased with the results. (IC1318 shot in the gallery below)

I'm ready for the next star party dark sky outing this weekend. Whew!!

IC1318 - Butterfly Nebula
As a test shot of the new Sirius system, here is 2 hours of 20 minute H-alpha exposures. 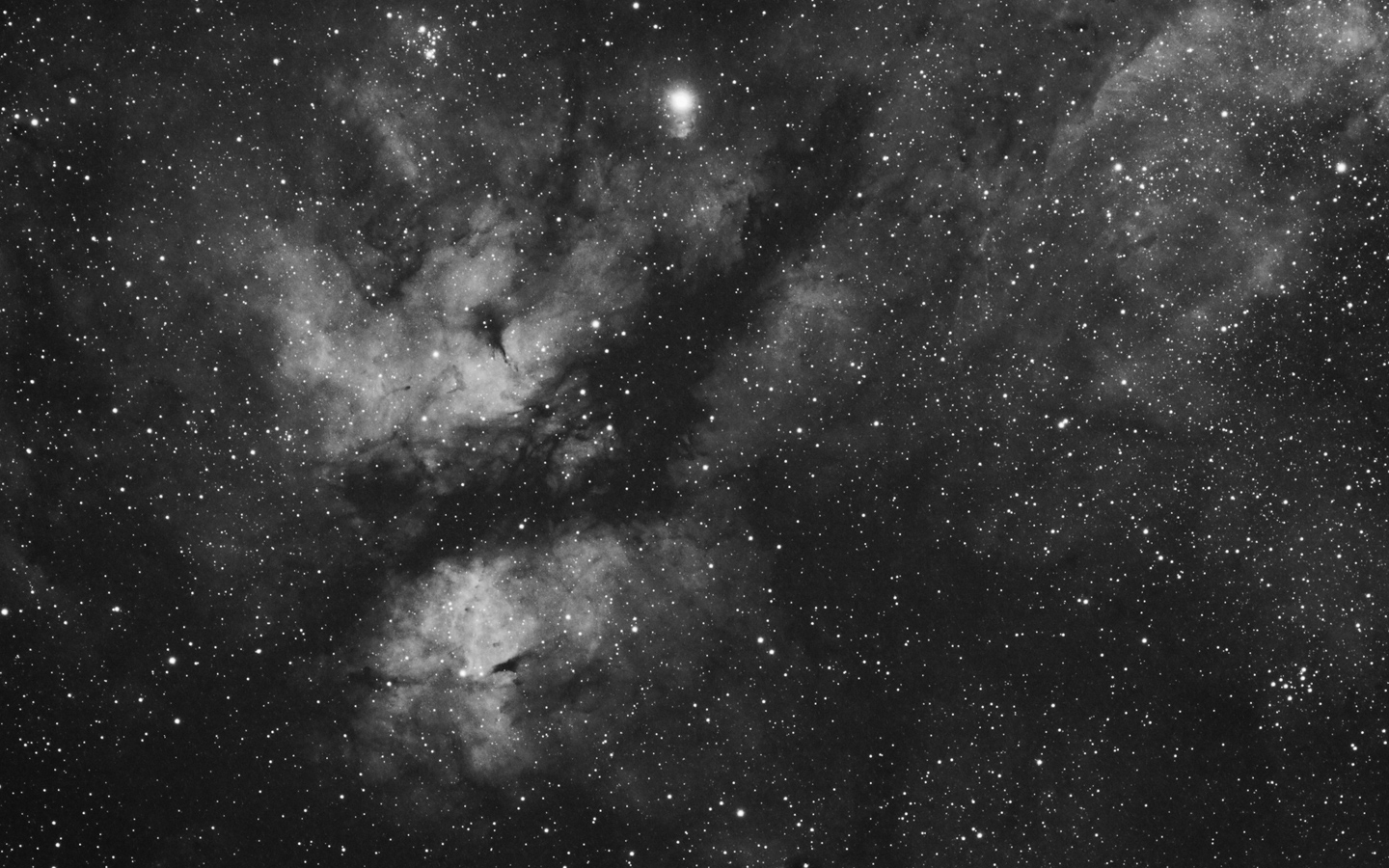