OSP 2013 was such a bummer. It was cloudy almost the whole time. I went 2 days early to get a little more viewing in. I'm glad I did too because it was the only viewing we had the whole time minus some sucker hole and some transient clearings here and there. I still managed to complete 3 of the 4 observing lists but I had to ask the neighbors and even staff members to turn out their lights. Just because it's cloudy, some of us are still trying to get views in when they become available.

So it was mostly a bust and a little too close to the scope blowing over the previous year. I ended up skipping all the major star parties in 2014.


THE ITCH IS BACK!

But... here we are. May of 2015 and I'm getting the bug again. The itch is back! I blew 3 years of dust off of my imaging equipment and took it through a trial run to see how bad the damage to the AT65EDQ was and to test everything to make sure it all still works - and to re-learn how to use it all.

Funny enough, my first impression was, "Wow, I really put something nice together here." I literally haven't touched it in 3 years and coming back to it, I can see that I was well thought out. Things that I completely forgot about were very intuitive because of the way it was all put together as a cohesive unit.

The first thing I had to do was balance the scope, but I had little subtle markings for where to line it up and it was instantly in perfect balance.

Then I had to plug in the cables and put on the dew heaters. My cabling is all pre-sorted and positioned in lengths that perfectly get to their respective components. Velcro bands and adhesive hooks to hold the cable in various strategic places along the mount so the cabling all sits perfectly, gingerly, and won't get caught or tangled on anything. Everything was wired up in a snap.

Then I had to power it all up... and I have my "magic box" - pre-wired with the USB powered hub, the FCUSB, the GPUSB, the Meade DSI USB, the DSLR USB, the 12v Dew Zapper power, the mount power, the DSLR power, all coming out of a single 12v connector to the battery. Plug that one connector in and everything powers up.

Then I had to move the system which is all set up on a Scope Buggy so it just rolled out with ease.

Then I needed to polar align it. I got on my knees to get Polaris in the field of view, then put the Phillips SPC900NC webcam on it (here's a quickie video on it if you are unfamiliar http://www.youtube.com/watch?v=qdfiQ4sGPH0), use my computer screen to align Polaris and confirm polar alignment and boom... a one star align nearly puts Arcturus right in the center of my field. Only a small RA tweak and a very tiny Dec tweak and it's dead center - GoTo is ready to rock and roll.

This is actually quite amazing how smoothly it all works together and how effortlessly the software controls the equipment. Before I just *did* it, so it was all natural to me and made sense to me as I was putting the system together. This time, I'm almost coming at it from an outsider perspective and I can really see why people wanted to know the details of my setup. Once again I thought, "Wow, I really put something nice together here" but I have a completely new appreciation for what it is and how well it works.

AT65EDQ-Test1
To my surprise, the test shot isn't half bad! I can see it's somewhat out of alignment as the halo on Arcturus is not centered, but overall the field still looks good and the stars are pretty nice. I'm stunned and amazed.. I better shoot something with a richer star field to double check. 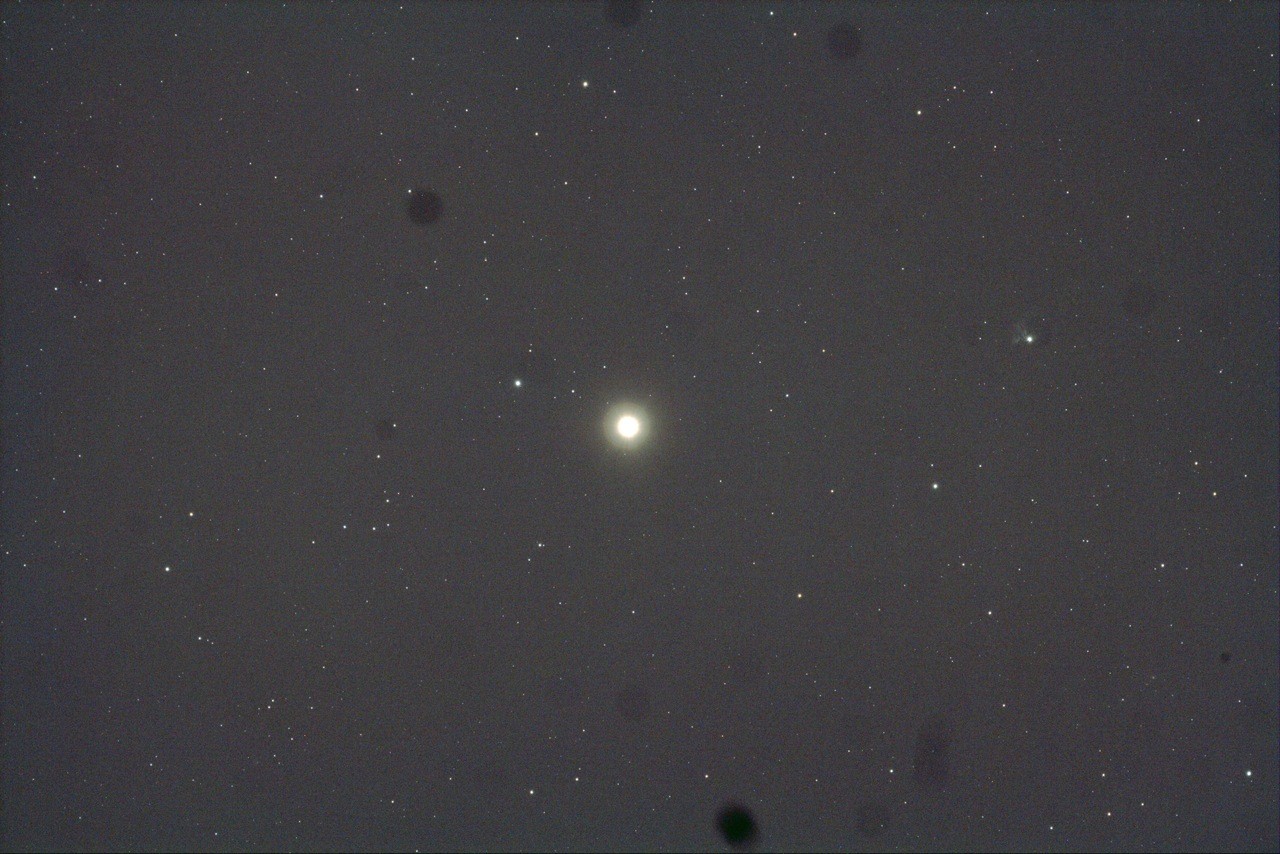 AT65EDQ-Test2
Well, well, well! (I know... 3 holes in the ground) Even the dense star field of the Veil proves to be not too shabby. In fact, because there are no significantly bright stars, you can barely tell things are out. This is looking much more promising then expected. I can work with this. Multi-panel mosaics, here I come! 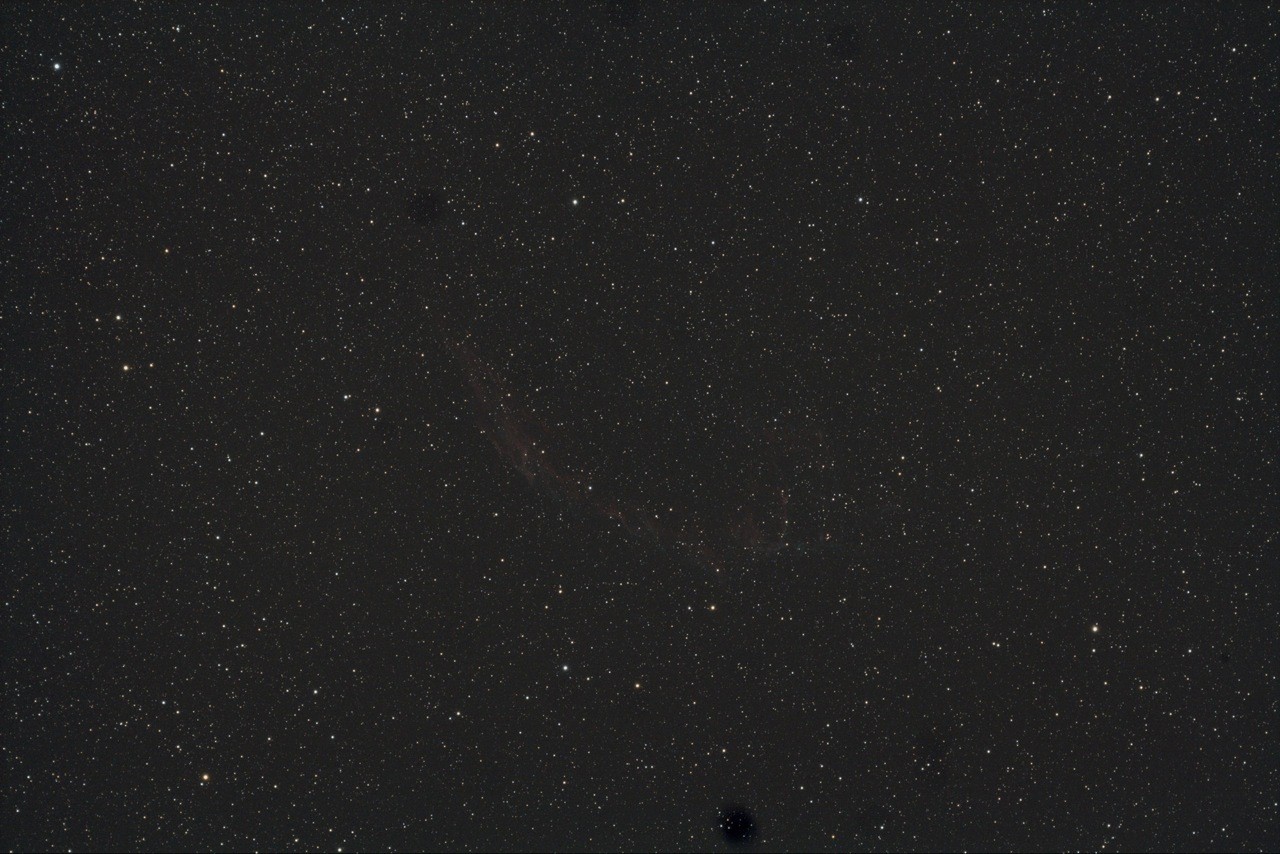 M3 - A Complete Run-through
I decided to start from scratch. Even though the moon is what, 60% or something and only 38 degrees away from the target, I'm just going to shoot it anyway. I swapped scopes to the Vixen ED103S
Scope: Vixen ED103S with WO Flat 4 0.8x FR/FF
Mount: Orion Sirius EQ-G with GoTo
Guiding: Meade DSI Pro and PHD Guiding
Guide Scope: William Optics ZenithStar 66 SD
Camera: Canon EOS 1000D (Modified)
Special Settings: None
ISO: 800
Exposure: 30 minutes (6 x 300s)
Processing: Acquired in Nebulosity with High Dither, Calibration and Stacking in Deep Sky Stacker as well as Ha/RGB alignment, levels and curves and such in Photoshop CS5
Support Files: 20 flats, 20 bias, 1 dark used as a bad pixel map 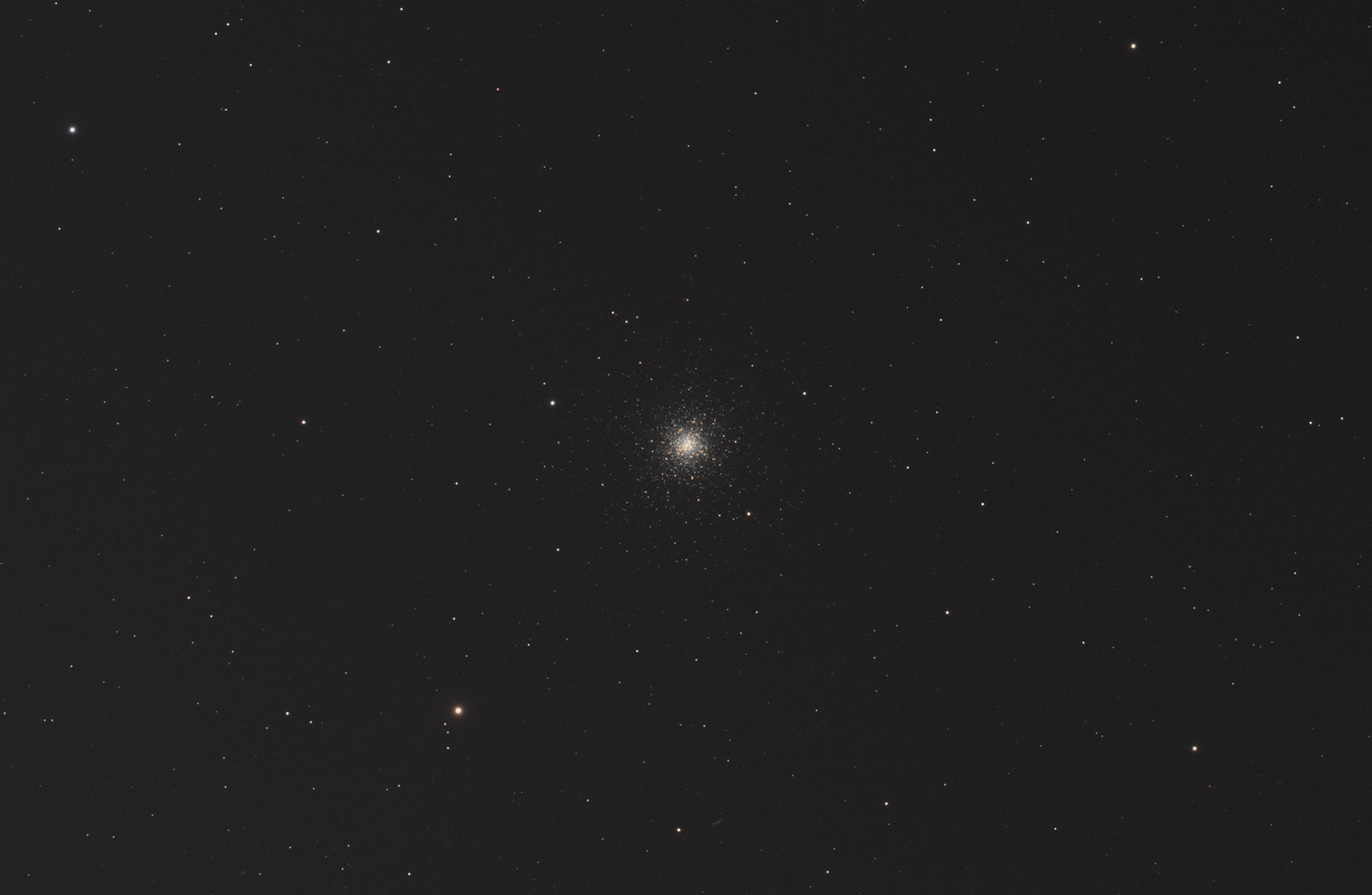