I've had a few conversations recently about the difference between my Vixen R200SS and my Vixen ED103S.

The ED103S
Aperture: 103mm (masked down to 90mm due to spacers in the light path causing unwanted diffraction spikes)
F Ratio: f/7.7 (but f/8.8 after the masking and f/7 after introducing the reducer)
Design: Apochromatic Refractor

I've used both of these scopes for over a year each and shot many of the same targets with them. Some are from my house in a Bortle 5 suburban sky and some from a Bortle 1 dark sky location.

In the comparison below you'll find a crop of M13 and the Veil. Here are the specs on the images for both scopes:

As a side note, the typical difference between 1.5 hours and 2 hours of shooting through any scope is negligible. In order to see significant increase in detail, you'd need to exponentially increase your exposure time, so don't think that adding 30 minutes to the ED103 shot is going to make a significant difference. I could have just as easily stacked only 90 minutes and we wouldn't really see much if any difference - my purpose in the additional time is just to get more subs for increasing signal to noise as opposed to more signal. The point here is that I'm not doing anything to compensate for the smaller aperture or the longer f ratio of the refractor.

Every faint star, every background galaxy, every wispy bit of detail is in both shots. They are both picking up the same magnitude of objects and displaying them at roughly the same brightness.

So my conclusion is that at these pretty small objective sizes (100 and 200 millimeters) it makes little to no difference between them and additionally the speed of the f ratio between f/4 and f/8 also makes no difference.

Now, I have a friend who has a C14 with a Hyperstar in it... THAT makes a difference!

So where is the breaking point? I don't know. Maybe it's tripling or quadrupling the aperture or f ratio. But at these smaller aperture it doesn't seem to be at doubling it and after this experience I don't think that reducing an f/7.5 refractor to f/6 is going to make a speed difference at all - even though that's what we're told.

Granted, to make a more fair comparison, I'd do them on the same night, or even side by side at the same time with 2 cameras, but I've shot many of the same targets from the same locations with both of them using my same acquisition and processing workflow and the results are always the same: Same amount of detail and background stuff, sharper images with the refractor. For me, 100% of the time, the smaller, slower refractor wins. 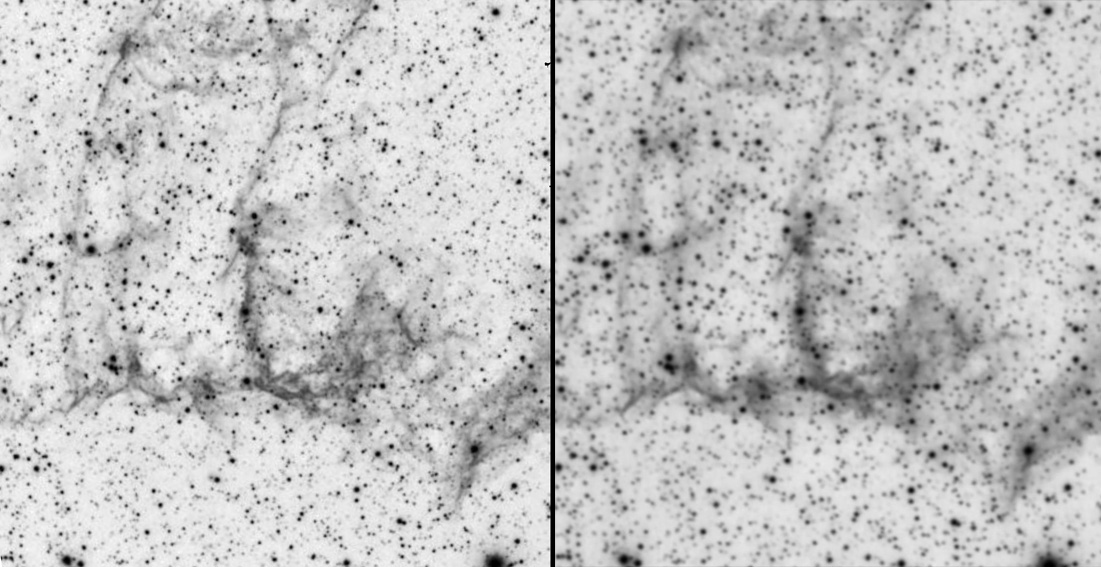 Comment by Robert C. Mills on July 13, 2011 at 9:13am
I think you need to look ast the actual spot size or spot diagrams of the 2 scopes. I have found that scopes with tighter /smaller spot diagrams produce better images regardless of some of the other factors. The R200SS has a central obstruction and collimation issues not found in refractors. For what it's worth.
Bob

Comment by Neil Heacock on June 16, 2011 at 4:23am
Jules, the astrophotographer in question is I, Neil Heacock, capturer of the dark dusty details in the Dark Horse nebula which was chosen as the Astronomy Magazine Picture Of The Day on January 10, 2010, and I can tell you that though the seeing conditions may have been different on the nights the various shots were taken, after a year or more with the R200SS and another year or more with the ED103S, in good nights and bad nights, dark sky and light polluted sky, the refractor outperforms the reflector every time. I always lets the reflector sit for an hour or two to acclimate to ambient temps before using it. Thats one of the reasons I don't like using it! I agree that the reflector will be more susceptible to scintillation, but there is another factor at play and that is the large secondary obstruction and particularly the large spider vains on that scope. That spider softens the image in that scope. The scope would perform better if a thinner spider was installed which some owners of the scope do.

Comment by Greg Marshall on June 2, 2011 at 8:39am
Clarification: Focal length is the prime determinant of magnification, which, of course, does affect susceptibility to seeing. But focal length alone does not.

Comment by Greg Marshall on June 2, 2011 at 7:23am
No, the larger aperture is "looking" through a wider column of air. This is true regardless of focal length or ratio - it's just aperture.

Comment by Neil Heacock on June 2, 2011 at 12:50am
Hmm... but if the two scopes have the same arc second per pixel I'd think they are equally susceptible to seeing issues. No?

Comment by Greg Marshall on June 2, 2011 at 12:22am
Here's another thought: Larger aperture scopes are more susceptible to seeing conditions, so you can't really compare compare scopes of different aperture unless seeing is perfect.

Nevertheless, I still think that the 200mm f/4 reflector is just not quite as good optically - maybe even without the obstruction.

Comment by Trevor Woodrow on June 1, 2011 at 4:02pm
Well done Neil. My instruments are lower end versions of what you have here...I have an old SVD 200mm F4 and an Explore Scientific 102 F7 and I would even argue that if one had an edge over the other...I would say the 102 has produced the better images.

Comment by Greg Marshall on June 1, 2011 at 3:36pm
Something I still wonder about is how much a star is different from other objects (things that aren't point sources) in terms of exposure.

As to whether f ratio matters, I've always felt that it does (and boldly said so!), but I've never done a careful measurement to test this theory. With my VC200L I use a reducer just because 1800mm focal length is just way too much magnification for the quality of guiding that I can achieve.

Comment by Russ Ruggles on June 1, 2011 at 2:59pm
Good point. Of course the cost of a RCOS three times the size of your scope will not be cheap.

Comment by Neil Heacock on June 1, 2011 at 2:41pm
One of the things I didn't mention is that when I got the R200SS I was upgrading from a William Optics MegRez 90 and I was looking forward to significant shorter exposures and detail increase... it never happened. I discovered right away that something isn't quite right with the theory on it. I don't know it or claim to understand it, but when I look at my images, I get better results with the smaller slower refractor so I'm staying here until I can really make a significant change in hardware. Minimum of tripling the system in aperture and I don't really care about speed. I mean... even the high end RCOS scopes are f/8 and f/9 and I don't see the owners reducing them to f/5 or something.