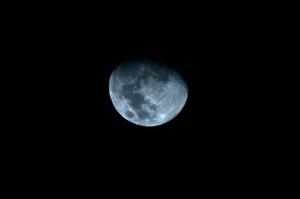 So, on the 27th of August, 2012, I imaged a “blue moon.” I had been reading that August would have two full moons. Anytime there are two full moons in a month, the second is known as a “blue moon.” Although I was four days from the blue moon, I decided to image the moon at 84% full. Here is my .004 second image. It’s very rare that you would see a blue-colored moon, although unusual sky conditions – certain-sized particles of dust or smoke – can create them. Blue-colored moons aren’t predictable. So don’t be misled by the photo below. The sorts of moons people commonly call Blue Moons aren’t usually blue.