As promised, here are the results of testing my ELF panel, an electroluminescent panel designed specifically for making "lens cap" type flats. That is, by placing the panel directly in front of the telescope. This technique does not provide the highest possible accuracy, but when done properly it works quite well and has the distinct advantage that you can do it in the middle of a shooting session without bothering anyone. ELF is designed to fit snugly around the end of your scope so that very little light leaks out.

To test the panel I needed an excellent reference flat to calibrate the equipment. I also needed to use a camera lens rather than a telescope because the images of the panel needed to be in focus (or nearly so) and taken in complete darkness. So I put a 200mm Tamron lens on my QSI 583 and took about 50 sky flats on a cloudless day (now you know why it took so long!), rotating the system between shots to remove any gradient in the sky. I then used these flats to calibrate the images of the ELF panel. Unfortunately, the flats turned out to be somewhat flawed, as you can see in this first image: 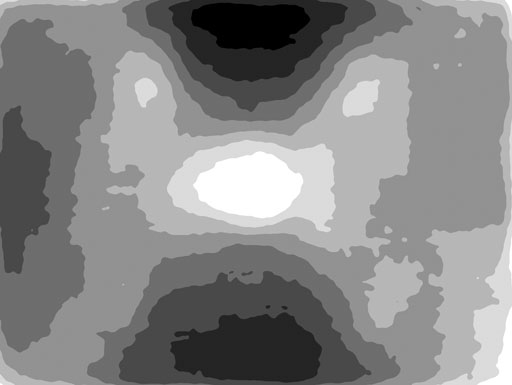 The pattern you see here represents the "petal" style lens shade of the Tamron lens. Having no way to remove this defect, I just hope that leaving it in the same relative position while taking the test shots would mitigate the effect. I know that it doesn't completely, but since the pattern is not visible in the test images, it is reasonable to assume that the defect in the flat is relatively small.

My first round of testing showed that the raw electroluminescent panel is not as good as I had hoped. The non-flatness is less than 10%, which is pretty good as a back light for a display, but not terrific for a calibration tool. Bear in mind that this is over the entire panel and just slightly blurred (to remove the graininess that is inherent in an EL panel). When the panel is placed right in front of the telescope it is wildly out of focus (flats should be taken with the scope focused at infinity), so only very strong regional non-flatness would be relevant. Nevertheless, I decided that I could improve that number using a compensation technique. The chart below shows the raw version on the left and the compensated panel on the right. In each column the top image is the full range image of the panel, the middle image is the histogram, and the bottom image is a "stretch" of the full range image that is "posterized" to show the equivalent brightness levels out of 256 (an arbitrary number, but useful for comparison). The test shows a non-flatness of 9.3% for the raw panel and 3.1% for the compensated panel. Comparing the 2 stretched images it is obvious that the second is under-compensated. This was my first attempt at it and I can probably improve it, but I don't want to promise something that I can't yet demonstrate.

Since the compensation process is time consuming and not necessary for most users, I've decided to offer both versions. The "standard" ELF panel for scopes with OD of up to 5.5" (sometimes a little more, depending on the specific design) is still $45. The "Pro" version with compensation is $60.

To get your ELF panel, send me a private message. Thanks!

I neglected to mention that either the standard or "Pro" version of ELF is available with an optional brightness control. This allows you to use reasonable shutter speeds, regardless of the filter being used. The option is $15.
You can achieve the same result by reducing the input voltage (nominally 12V DC).